A community full of support 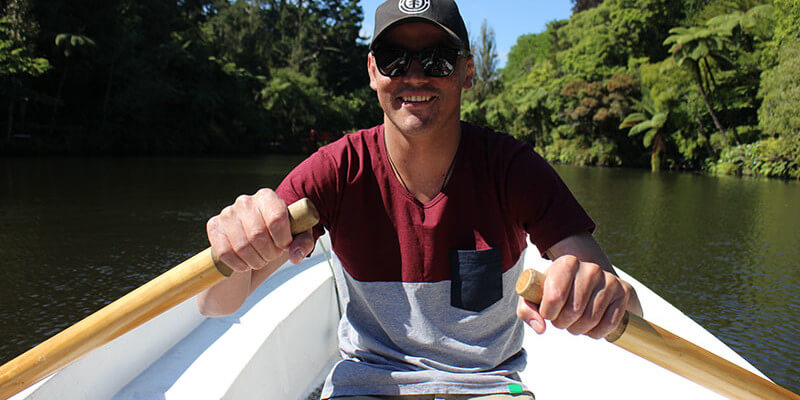 When 24-year-old farmer Damian Bardoul went on a pig hunting trip for the weekend, his friends said “there must be something wrong if you can’t carry your pig out of the bush.” Only a few days later he was struggling to run up and down the field at rugby practice.

“I went to the doctors for tests that week. The doctor then called and said I needed to get to Waikato Hospital right away,” says Damian.

The next day Damian was told he had acute lymphoblastic leukaemia.

“I had been tired for a while but I just dismissed it as nothing. One of the guys at rugby said I must have low iron so I thought I was fine,” says Damian. Damian’s parents rushed to the hospital unaware of his diagnosis.

“When my parents came in I just lost it,” says Damian. “My dad just went completely pale.”

Damian’s family and friends struggled to come to terms with the diagnosis as the 22-year-old was fit and healthy. After initial bone marrow tests, everything happened quickly.

“My brother told the doctor I ate porridge for breakfast every day and was the fittest guy he knew so he must have got the wrong patient,” says Damian.

“I was hunting on the Monday and by Thursday morning I was starting chemotherapy,” says Damian.

After a full cycle of chemotherapy, Damian was sent home to rest. His doctor seemed confident the chemotherapy was going to work. A week later Damian headed to the doctors hoping for good news.

“My doctor seemed shocked when he read the results. He simply just said, ” “Damian, the chemo hasn’t worked.””

The results showed 60% of Damian’s cells were still leukaemic and they were meant to be under 3%.

“That was when mum and my girlfriend Lauren really broke down. I tried to keep it together and asked what the next step was.”

Immediately, Damian was tested to determine whether he would receive a very high dose treatment of chemotherapy called Ara-c. He was given the all clear and started the treatment right away.

“Waiting for the results from that round of treatment was really nerve wracking. We didn’t know what would happen if it didn’t work,” says Damian.

“My doctor rang me at 8pm the night of my tests and said “I’ve got some bloody good news for you Damian” and I knew it had worked.”

The following months were spent undergoing further rounds of chemotherapy, radiation and a bone marrow transplant in Auckland Hospital. Damian’s older sister was the only match out of seven siblings who could donate cells.

“My sister had just had a baby and giving cells meant she had to stop breast feeding, but she still did it and was just happy that she could help.”

Although Damian’s family and friends were from Waikato, it seemed like there was a never ending stream of people coming to support him even while he was in Auckland City Hospital. Both of Damian’s rugby clubs held nights in honour of him. The entire community came and over 35 of Damian’s family and team mates shaved their heads to show solidarity with him.

“Those nights were just mind blowing, it was so emotional for everyone involved,” says Damian.

“Three of my sisters shaved – one did so from Ireland and my best mate shaved his dreads. It was overwhelming how much support I really had.”

Although he says it could have been easy to be negative, Damian chose to focus on positive things.

“When I was in hospital the amount of people that came to visit was amazing. My rugby coaches, old school teachers, rugby team mates all came in, it was incredible.”

Damian’s girlfriend Lauren was working as a nurse in Waikato Hospital and was there every chance she could.

“Lauren was unreal throughout everything. She would stay in the hospital with me then get up and go to work in that same building. You really knew when she wasn’t there.”

When Damian was well enough the couple took a trip to Australia at the start of 2014 where Damian proposed to Lauren who said yes. At only 24 Damian’s take on life has now completely changed. Although some things are harder to do than before such as tasks on the farm, he never takes anything for granted.

“You just don’t know what is around the next corner.”