Emotional support the most important thing 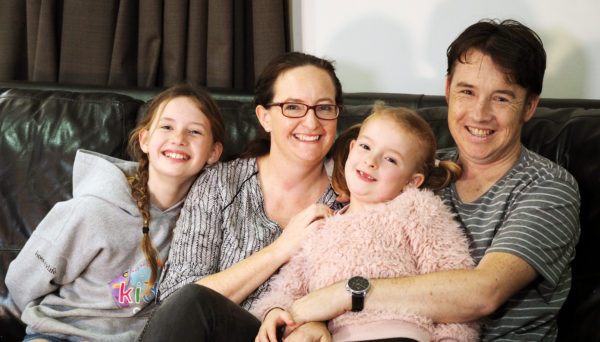 LBC not only supports patients and families going through blood cancer, but also those facing a myriad of other debilitating blood conditions such as aplastic anaemia, sickle cell anaemia and thalassaemia.

Dad of two Anthony McQuoid has been living with his blood condition all his life.

As a young child Anthony experienced severe anaemia – but doctors weren’t able to identify the cause. It was only later, after multiple tests and ongoing transfusions that Anthony was told he had a blood condition called Haemoglobin Volga. As Anthony’s wife Meredith explains:

“It’s a very rare, chronic condition which means Anthony’s blood can’t carry enough oxygen around his body, he’s the only person in Australasia to have it which has made it especially hard to deal with.”

Anthony’s condition damaged some of the small blood vessels in his body – this affected blood flow to his brain. Four years ago, at the age of just 38, he started to experience multiple strokes and had to have urgent brain surgery to re-route blood flow to parts of his brain. It was a very difficult time for the whole family, as Meredith explains:

“Anthony being so ill was especially hard on Maia because she was that little bit older, she knew more about what was going on – it was a really scary time for all of us.”

Thankfully Anthony made it through his brain surgery but it has left him with lasting side effects, in addition, his condition means he is on a relentless cycle of treatment every six weeks where has to go into hospital to receive a transfusion of red blood cells, as he explains:

“I get hooked up to the machine on the Friday and it takes me until Sunday to recover and then by Monday I am feeling OK again. By the fourth week I start going downhill and it gets a struggle – by week six I’m hanging out for the treatment and the cycle begins again.”

Anthony’s condition has been hard on the whole family – a few years ago things started to get really tough so Meredith got in touch with LBC:

“We are so grateful for the support we receive from LBC – especially for Bella and Maia. LBC helps families with lots of different things like getting to appointments, parking at hospital or food vouchers…plus emotional support which for us was the most important thing. LBC’s Kids Club really helps our girls – we have had a couple of really tough years and LBC have been able to make it a bit easier for us.”

The support that helps families like the McQuoids is not funded by the Government but by thousands of warm-hearted Kiwis – thank you to everyone who chooses to help.