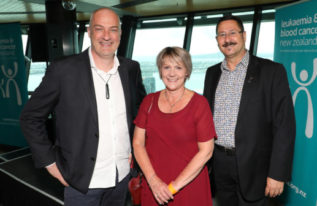 A Kiwi cancer survivor has successfully raised $15,000 for Leukaemia & Blood Cancer New Zealand after scaling the Sky Tower’s 1103 steps, bogged down with 25 kilograms of firefighter kit.

The annual Firefighter Sky Tower Stair Challenge raised almost $800,000 for the charity, an organisation that has supported numerous Kiwis through their battles with blood cancer.

Partakers of the challenge are clad in firefighter gear – including the uniform, breathing apparatus and helmets – while they scale the Auckland landmark’s extensive staircases.

Lymphoma survivor David Downs was one of the participants on Saturday, raising a substantial sum for the charity that provided crucial support throughout his grueling treatment.

“I’m in remission now, I’m really lucky I got through that – but all the way through when I had cancer, I was supported by Leukemia & Blood Cancer New Zealand. The charity does all sorts of things to help patients,” Downs said on The AM Show on Monday morning.

“When they asked me if I’d climb the Sky Tower to raise some money, I said sure. That was like nine months ago, and I forgot about it – then [the time came] and I was like, ‘oh my God, I’ve got to do it’.”

Downs says the annual event gave him a target when he began to work on improving his health and fitness – a goal he set for himself following intensive chemotherapy.

“I wanted to get fit and healthy. After having cancer, going through chemotherapy, I started doing some training, but I needed a goal. This was a great goal,” he said.

“Part of this is the celebration that New Zealand can do these sort of events – people who have cancer, who are immune-compromised, don’t have to sit at home in cotton wool.”

Downs also posed a challenge to The AM Show co-host and sports-reader, Mark Richardson.

“I’m doing it next year, would one of the three of you join me?” he asked Richardson, host Ryan Bridge and newsreader Amanda Gillies.

“I’d definitely do it,” Richardson volunteered. “Without a doubt.”

Downs, who completed the challenge in 19 minutes, 48 seconds, challenged Richardson, a former cricketer, to beat his time in the 2021 event.

Newstalk ZB host and broadcaster Heather du Plessis-Allan was the fastest woman to ascend the stairs, with a time of 12 minutes, 29 seconds.