When Nick began experiencing back pain that progressively got worse he went to the osteopath and chiropractor in an attempt to get some relief. As he explains: “I was only 48 at the time and was otherwise fit and healthy but it got to the point where the pain was so bad I couldn’t walk.”

Nick’s osteopath recommended he see a doctor. He was referred by his GP to an orthopaedic surgeon and an MRI showed Nick had a growth on his sacrum. Nick was sent to Wellington Hospital from his home in Whanganui where further tests revealed the growth was a plasmacytoma– his doctors told him it was likely to progress to multiple myeloma. That was back in April 2006 and by May, Nick had begun radiation treatment in Palmerston North Hospital. Nick’s pain improved but his cancer was progressing – in 2007 he had an autologous Stem Cell Transplant (SCT), he explains: 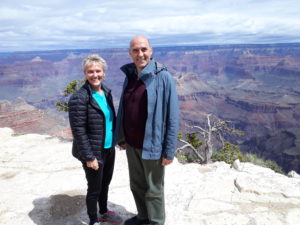 “They told me the SCT was likely to last about five years – they were spot on! For most of the next five and a half years I was in remission and, once the pain had resolved, I was leading a pretty normal life and got back to tramping and playing tennis and golf.”

In 2012, after a move to Rotorua, Nick’s cancer started to reappear and his haematologist recommended a second SCT – at the time he was told it would likely last a further two years. By 2015 blood tests revealed Nick’s cancer had started to progress again so he began Lenalidomide (which at the time, had just been funded by Pharmac). That worked for nearly a year but as Nick explains: “In 2016 the cancer came back and they didn’t know what they could do next so they looked at an allogeneic SCT. However the doctors explained it had only a 10% chance of cure and 60% chance of ongoing problems.”

Nick and his wife Rose had a lot to consider. When it came time to meet with the team at Wellington Hospital things took a sudden turn: “We had decided to try the allogeneic SCT but the team said “we don’t need to give you one – there is a drug trial you can go on… it might help you!”

Nick entered an international trial of 300 patients to test if the immunotherapy drug Keytruda, when given in conjunction with Dexamethasone and Pomalidomide, had benefit for patients: “I was randomly selected to receive just Dexamethasone and Pomalidomide (so was in the control group), it helped me for three to four months but the trial had a rule that if your counts increase 25% you have to stop and that happened for me.”

Nick went on to cycles of different drugs, some had benefits for just a few months, others for up to 18 months. In May this year Nick’s online research uncovered a drug called Selinexor that had been recently approved in the USA. His haematologist supported him in making an application to receive a compassionate supply which he began taking in July. 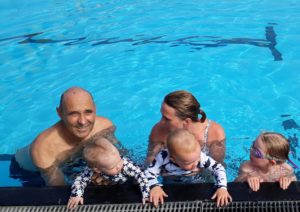 It has been a long road for Nick as he says: “The most difficult time for me was at diagnosis – I was 48 with one child still at school and I was told there’s no cure. But my youngest daughter is now 30 and whilst I am certainly not going to have an average life expectancy, I am still here!”

Nick has now retired from full-time work but still volunteers in his community and leads a full life: “I can still walk around the golf course and get down on the floor and play with the grandkids! ”

Nick attends LBC’s local support group: “I’m now in my 14th year with myeloma and it can be helpful for people who have just been diagnosed to meet someone like me. When I was first diagnosed it was a nervous wait for each set of results of scans and blood tests but now it’s just part of the fabric of my life.”