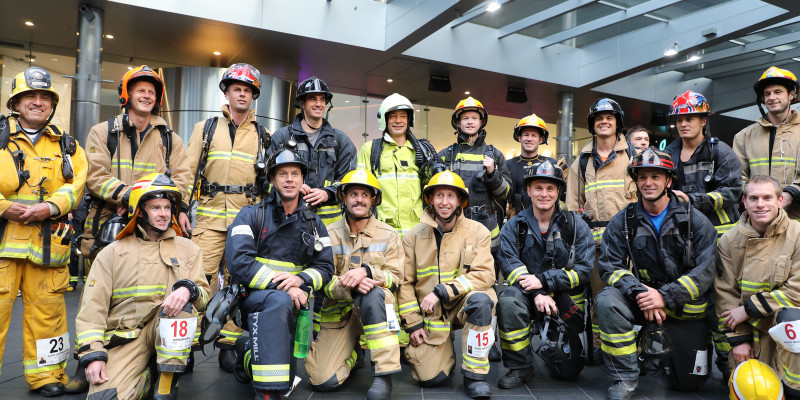 Nine hundred and fifty firefighters from communities around New Zealand, as well as Australia and the USA, took to the 1,103 steps of Auckland’s iconic Sky Tower wearing up to 25 kilograms of firefighting kit.

Ken Laurie from Hastings Fire Station who raised $14,020 was named the top fundraiser.

Lyttelton Volunteer Fire Brigade received the Community Spirit Award following the event. The team was given a long handled Māori club, a tewhatewha, carved by last year’s recipients of the award, Kerikeri Fire Brigade. The tewhatewha was carved in kauri and inlaid with paua shell and represents hope. The award recognises communities that go the extra mile in supporting their brigade’s efforts.

The fastest firefighter winning for his eighth year in a row was Josh Harrison of Mt Wellington Fire Brigade who set a new record for the event at 8 minutes and 11 seconds. In second place was Andrew Tomlinson from Howick Station who completed the climb in 9 minutes and 19 seconds, while Gavin Mason of Queenstown Airport was third with time of 9 minutes and 34 seconds.

Gavin Mason’s time was all the more remarkable given that last year he was diagnosed with the rare autoimmune disease Guillan-Barre Syndrome and barely able to climb one flight of stairs.

The fastest woman up the tower was Ady McKenzie of Whangarei Fire Brigade with a time of 13 minutes and 12 seconds. For a full record of race results please visit firefightersclimb.org.nz.

“We are so grateful for the tremendous generosity and hard work of firefighters who fundraised such a phenomenal amount of money for the Firefighter Sky Tower Stair Challenge. We would also like to thank the many communities throughout the country who support their local brigades so enthusiastically in their fundraising efforts.

“This fundraising is so important to help grow our service supporting families living with blood cancer, right across the country.”

The event is supported by SKYCITY and Auckland Airport.