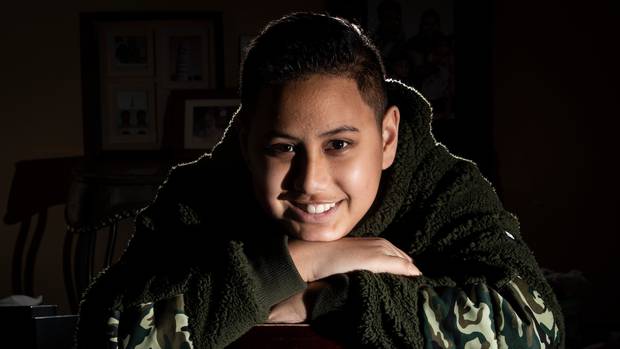 At the end of June, Gregory Ah-Kuoi got a cold he could not get rid of.
His health deteriorated quickly, and soon he was struggling just to tie his shoelaces.
Then, a month ago and aged just 13, he was given a shock diagnosis. He had pre-B acute lymphoblastic leukaemia.

Each year 50 Kiwi kids are diagnosed with leukaemia – the most common form of cancer in children. While many of them beat the disease, the treatment is long and challenging. In Gregory’s words, he is going to kick leukaemia in the butt.

Two months ago, Gregory, a Year 8 student at King’s School, was a strong, healthy rugby forward.
At the end of June, he got a boil on his thigh and then the persistent cold. He went to the doctors both times and was given antibiotics, but if anything he got worse.
He was pale, lost his appetite and even the smallest of tasks like tying his shoelaces or opening the front gate wore him out.

“He’s a big, solid kid,” Salamanaia said. “He’s taller than me. He’s really healthy. There have been no health complications with him. He’s not on any medication. It was just weird how it all progressed really quickly from a cold to being so pale to not eating. He had no problems before that.”
On July 2, he couldn’t even get out of bed and – totally out of character for him – told his mum he didn’t want to go to school.

They returned to the doctors for the third time in 11 days and blood tests revealed within a few hours that his blood count was only 50, half of what an average person’s is.
They were told to go straight to Middlemore Hospital and on arrival, he was rushed into quarantine in a wheelchair. “He was just so tired. He could barely walk. His energy levels were dropping dramatically,” his mother said.
After blood transfusions and a bone-marrow procedure – which confirmed the cancer – he was given chemotherapy the next day and has had six rounds so far.

Doctors have told Gregory the treatment will take 3 years and he cannot go back to school for the first nine months while his immune system is still low.
For the first month it meant he also couldn’t attend church or go to the movies, but he’s slowly being allowed to do more of those things providing he goes mid-week when it is not busy and he wears a mask.

Leukaemia & Blood Cancer NZ head of support services Emma Barker said the improvements in diagnosing and treating acute lymphoblastic leukaemia meant the majority of children with it went into remission and most would be cured.

However, Barker said the treatment was long and there were some side effects from chemotherapy. Some families often had to relocate to be near main hospitals for treatment and long periods away from friends and whanau could be challenging.

Gregory won an academic scholarship to King’s School in Remuera last year when he started in 2017 which will take him right through to college.
“He’s a bright kid,” his mother said. “He does really well. I think he sets his standards really high. He likes to do well.”
He will continue his schooling from home and through the Northern Health School based at Starship. He’s already surprised the teacher by choosing to do two subjects.
“He’s so strong. I sometimes forget he has what he has.”